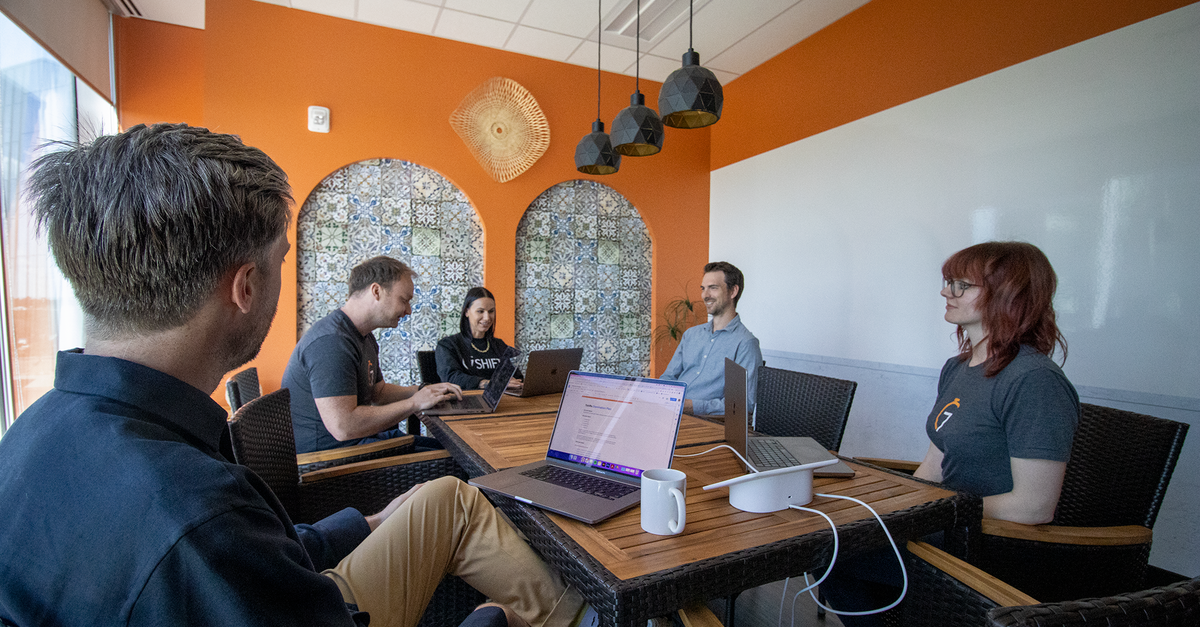 Although Silicon Valley has long been associated with high-tech start-ups and Toronto has a reputation as the high-tech centre of Canada, Saskatoon is coming into its own as a centre for technological excellence. There are several large-scale, high-tech companies in the city including 7shifts, a world leader in team management software for the restaurant industry.
7shifts has more than 330 employees situated at its offices in Saskatoon, Toronto, and New York City, and approximately 30,000 companies around the world are using its software to manage 750,000 employees. It all began in 2013 when Jordan Boesch decided there must be a better way for his father to manage his employees at a couple of sandwich shops in Regina.
His father’s office was full of sticky notes and papers, and all this information was then later placed into an Excel spreadsheet for scheduling. He would print and post it for staff to see, but many didn’t notice it, while others would cross off shifts and trade shifts without his father’s knowledge.
Boesch created a software solution with most of the coding developed during his spare time. Realizing the potential to help other businesses, he decided to recruit two new co-founders, his now-wife Andrée Carpentier and friend Johannes Lindenbaum.
Together they were accepted into an accelerator program in Silicon Valley back in 2014. “We all quit our jobs and moved to California for six months. We had absolutely nothing to lose, and this was the time to do it,” said Lindenbaum, who is now the Director of Architecture for the company.
There the trio gained knowledge and technical experience while raising $200,000 in seed funding to hire new software developers. Rather than remain in San Francisco, they took the funds back home to Saskatchewan, which Lindenbaum admits raised a few eyebrows.
But Prairie pride and persistence proved to be the winning formula. “We moved everything to Saskatoon because there was a big tech market there, and more access to developers with the ‘start-up’ mindset,” said Lindenbaum.
The software now goes beyond scheduling, intent on owning the hospitality employee lifecycle, with tools that help hire, train, schedule, pay, and retain. Ultimately, the software will help workers seeking restaurant opportunities, matching their skills and experience. This will help employees receive the remuneration they are seeking and help employers to find the right people when they need them.
This approach will help lower turnover rates in the industry and create new benefits for restaurant owners and workers. Although the software may have applications in other industries, Lindenbaum said the company has focused on the restaurant sector with its goal to become the industry leader.
And what better place to lay that foundation than in Saskatchewan? Lindenbaum credits the company’s rapid growth to the accepting community, the abundance of accessible resources, and the significantly lower overhead cost compared to other major metropolitan cities.
These factors make him ask the question: “Why can’t we have a Silicon Valley-type ecosystem in Saskatchewan?” The prairies not only boast strong wages and a lower cost of living but have a government that prioritizes the economic advancement of the province through local businesses.
There are also many government programs in place that encourage both innovation and investment, which makes Saskatchewan a great place to develop technology. The Saskatchewan Technology Start-up Incentive (STSI) tax credit (which increased from $2.5 million to $3.5 million this year) is designed to attract major investment to the province. Since launching in 2018, the program has attracted over $49 million of investment into 84 early-stage companies from over 298 angel investors.
As part of the 2022-23 budget, it was announced that the province was moving to a single innovation agency, aligning the government owned research parks operating under the name Innovation Place with Innovation Saskatchewan. The new agency will support the goal of tripling the tech sector in the province by 2030 by integrating park’s world class infrastructure with Innovation Saskatchewan’s programs.  This will result in additional support to start-ups and early-stage technology companies and encourage new and established technology companies from Canada and around the world to relocate and grow in the province.
A tech ecosystem has been established in the area, and Lindenbaum said there is a collegial environment in Saskatchewan in which industry players support each other. “What’s really interesting is that so far within Saskatoon, we don’t really have a lot of competition for market share,” Lindenbaum said, “There’s not a lot of companies that seem to overlap in the same consumer space.”
Similar to others in the restaurant sector, Lindenbaum said the company suffered through the pandemic but came back stronger than ever. After furloughing about a quarter of their staff, the company brought them back, added more staff, and added 10,000 new restaurant locations last year as companies recognized the importance of recruiting and retaining their employees. After spending time at home, 7shift’s returning and new employees were greeted to new office space when the company relocated its headquarters into the newly constructed Nutrien Tower.
The growth of 7shifts and other high-tech companies in Saskatchewan, such as Vendasta Technologies and Coconut Software, have not gone unnoticed by venture capitalists. Recently, 7shifts secured $80 million in funding from Softbank, a Japan-based multinational investment company, along with Ten Coves Capital and Enlightened Hospitality. Previously, the company raised $21.5 million from Enlightened Hospitality about a year ago and closed a $10 million funding round in 2019.
Along with this funding comes experienced industry people to serve on the board and help set overall direction for the company. This has played a crucial role in the company’s success.
This type of growth from 7shifts and similar companies in the Saskatchewan high-tech sector doesn’t come as a surprise to Lindenbaum.  “We have a lot of support from other companies here in Saskatchewan,” he said. “We are all very supportive of each other and understand the growth we want to introduce into this new ecosystem.”