A Flight Into History

Saskatoon-based unmanned aerial vehicle (UAV) manufacturer Draganfly Innovations Inc. made headlines in November, 2014 when the Smithsonian Institution’s National Air and Space Museum in Washington, D.C., added the company’s Draganflyer X4-ES to its permanent collection, the first UAV to find a place in the museum.

This particular UAV had itself made headlines more than a year earlier when, in May, 2013, it had been used to locate a man who went missing after being injured in a car crash near St. Denis, east of Saskatoon. Ground searchers and air ambulance crews were unable to find the driver, but the UAV, equipped with forward-looking infrared (FLIR) imaging, pinpointed the acutely hypothermic man and allowed rescuers to retrieve him in the nick of time. It was the world’s first documented life-saving search-and-rescue mission involving a small UAV, and that’s why the Smithsonian wanted this X4-ES.

While most people now associate UAVs and drones with recreational or hobbyist use, Dragan foresaw a different direction early on.

“We started off in the hobby market and then we moved more to the industrial market,” he says. “We started working with police departments.”

“These UAVs are often used for things like accident reconstruction,” Dragan says. “We can fly over an accident and can collect a lot of data in a very quick manner. It's very accurate data and police can clear the roads faster.”

“We can create a 3-D model that’s accurate within a couple of centimetres,” he adds.

The same technology is also ideal for homicide investigations.

“For court purposes it really gives you a much clearer picture of what they think happened,” he says.

In addition to these types of public safety uses, the technology has immense potential in commercial and industrial applications, such as oil, mining, utility and agriculture, Dragan says.

“We can fly and scale a tower—and take video and photos while going up there—and give very accurate imagery showing the condition of that tower,” Dragan says, explaining that recent tests for an Ontario utility company showed great promise, quickly pinpointing problems presented on a simulated tower inspection.

“We found all of them in a three or four minute flight,” he says. “We can very quickly get that information.”

The most imaginative applications of UAV technology can also be the most unexpected. Citing one such instance, Dragan explains that the company has completed a novel assignment for the Ministry of Highways and Infrastructure.

Throughout the province, large piles of sand and gravel await use in upcoming maintenance and construction projects.

“They need to accurately measure how much gravel is in a pile and account for it,” Dragan says. “Right now, they kind of do an educated guess. We flew over the gravel pile, in a couple minutes, and we put it into a program that tells you the volumetric of the gravel pile. It's no longer a guess — and it only took a couple of minutes.”

“Our image quality is so good, you can see the writing on the heads of the bolts. It's a lot of information that's captured a lot easier than it ever could be before.” 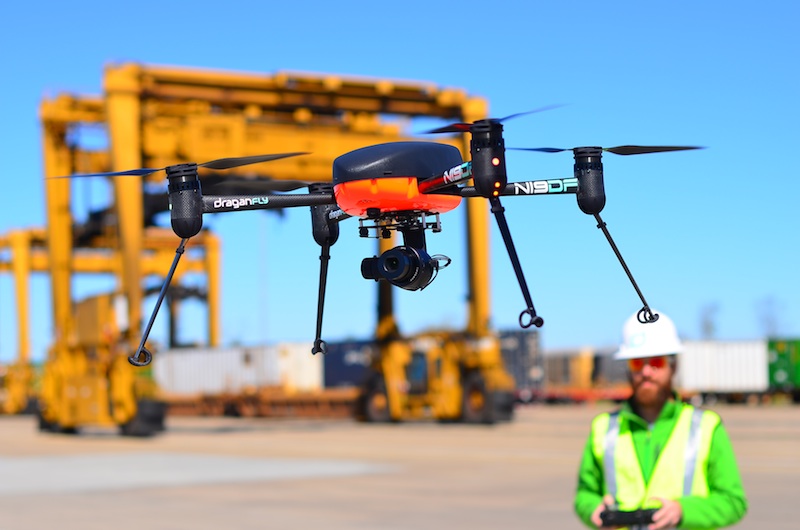 One of the reasons that these applications are so successful is that the company writes its own software, working with established mapping companies to create new, specialized systems that support a wide range of commercial and industrial applications.

“We had no idea that we would actually be using UAVs for a particular reason,” Dragan says, explaining one very unusual request.

“We went to go look for Sasquatch in BC for a film company in the United States, using our thermal camera. No, we didn't find it, but we never thought we would be looking for a Sasquatch or Bigfoot! There's no end to the applications.”