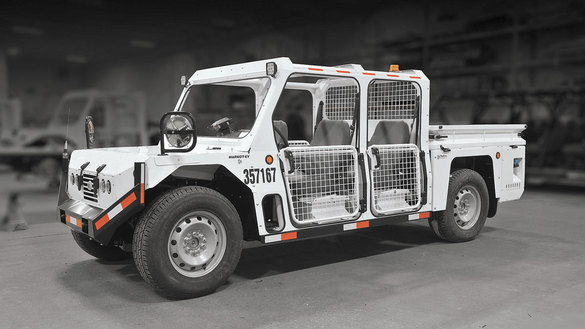 Article sourced from Fall/Winter 2016 Issue of  ORE - the Official Publication of the Saskatchewan Mining Association.

While the race is on above ground to develop mass market electric vehicles by automotive and IT giants including Toyota, Ford, Tesla, and Google, a Saskatoon-based company, Prairie Machine & Parts is leading the race underground.

The use of electric vehicles in underground mines is a growing trend, and Saskatchewan mining companies are among the early adopters. Many factors are driving the move from diesel to electric, but it all comes down to emissions or, more accurately, the lack thereof. Electric vehicles produce zero emissions.

“Air quality is definitely the number one factor behind the growing use of electric vehicles in underground mining operations. PotashCorp, Mosaic and Agrium all currently use our electric vehicles at their mine sites,” said Kipp Sakundiak, general manager of PMP.

“Using electric vehicles instead of diesel improves underground air quality, reduces greenhouse gas emissions, lowers noise levels; they even generate less heat. They help reduce operating and ventilation costs. They’re also quiet; you can be driving along and having a conversation with the guy beside you.”

PMP is a Saskatchewan-based, internationally recognized manufacturer of heavy industrial machinery and machine components that’s been serving the mineral mining, steel production and oil and gas industries for over 35 years.

They also have great names. PapaBravo’s first machines were, appropriately for the mining industry, named for burrowing mammals – including the marmot and badger. Indeed, the prototype was the Gofer.

The full line of vehicles includes two to 12-passenger transports, 4×4 electric trucks and 4×4 electric vehicles. Vehicles and trucks can travel from 100 to 120 km on a single charge unloaded and from 65 to 90 km carrying a payload. Hauling capacity ranges from 3,500 lbs for personnel carriers, to 4,000 lbs for the 4x4s, to 7,200 lbs for heavy duty trucks. Depending on the charging option, vehicles can recharge to 65 per cent in an hour and fully recharge in two hours.

“The units being provided by PMP are just as capable as many of the diesel machines we’ve been using in mining for years without the downside that comes with burning diesel. It’s been very beneficial to have a progressive Saskatchewan-based partner who understands the unique needs in a potash mine,” said Matt Johnson, Mine Manager, Esterhazy K1 facility with The Mosaic Company.

“The technology is getting to the point where we don’t have to make a compromise in performance to utilize the electric vehicles.”

“We build all of our vehicles from ground up in our Saskatoon facility,” Sakundiak said. “Every vehicle is made to order—we pride ourselves on being able to customize to specific client needs and configurations. For example, the way we kit out a welder’s truck for one client will be different from that of another, everything from equipment brackets to customized toolboxes and tank mounts. And our engineers work with clients to develop the best vehicle charging strategy for their particular situation.”

There’s also growing industry interest in the software capabilities of electric vehicles, whether it’s being able to collect detailed, day-to-day data on vehicle use for use in asset management plans, or being able to control how fast a new employee drives a vehicle and which areas specific vehicles are allowed to access.