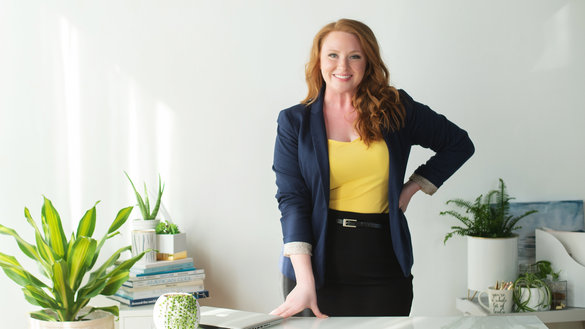 Award-winning entrepreneur Katherine Regnier candidly admits “I was terrorizing myself” trying to decide whether to accept venture capital funding for her Saskatoon-based Coconut Software company, an appointment scheduling solution that already had landed Regnier a lucrative contract with TELUS Corporation.

“I spent a lot of time flipping back and forth asking myself ‘do I want to do this or not?’ I had a good lifestyle, so it was not an easy decision.”

In the end, Regnier accepted the equity financing and by November 2017, Coconut had received a total of almost C$5 million from Canadian and American venture capital sources. Today, the company’s outlook is brighter than ever and Regnier, who retains majority ownership of her company, says she has no regrets whatsoever.

“Our goal now is to grow into a $100-million per year revenue company,” says the mother of two and winner of the 2018 Prairies Startup Canada Woman Entrepreneur of the Year Award. “That’s the mountain we’re climbing.”

Scheduling appointments can be more complicated than one might suspect. Coconut client Jackson Hewitt Tax Services is the second largest tax preparation company in the United States with 21,000 tax preparers across the country. Were a potential customer to phone Jackson Hewitt to make an appointment, the employee answering the call would not likely know the expertise of all employees in the regions. “Our software can match-make them in lightning speed and the customer can make an appointment in real time,” says Regnier. Client companies still need to focus on quality customer experience and sound marketing. “But on the efficiency side, the fact our system can let Jackson Hewitt know exactly who is the right person at the right time, that’s magical.”

Coconut’s story reaches back to 2005 when Regnier was working for a Saskatoon company that required her to do a good deal of travelling, including scheduling her own itineraries. “I came to a point where I wondered ‘why can I book a flight quicker than I can book my massage therapist, who’s just down the hall?’”

Regnier, who grew up on a farm near Prud’homme, Sask., has a diploma in graphic design and always dreamed of running her own business. She began working after hours mapping out a web-based program that would allow individuals to schedule appointments any time from any computer.

She continued to focus on her program while working for four years at Saskatoon’s pioneering digital products and services firm zu.com, who supported her side project and where she met her future chief technology officer, Romeo Iula. Once she landed the TELUS deal in 2010, Regnier had the confidence to leave her day job and focus full time on developing Coconut, which saw slow but steady growth until 2016. That’s when Regnier and Iula attended the mammoth Web Summit trade show in Dublin, Ireland, a trip funded by Saskatchewan Trade & Export Partnership.

Iula was standing at Coconut’s booth when a woman representing Neal Dempsey of Bay Partners, one of Silicon Valley’s venture capital companies, approached him. She asked whether he was the CEO. “He said ‘no, she’s standing right behind you,’” Regnier recalls. “I think she was kind of blown away that I was a female CEO. But for some fortuitous reason, among 50,000 people at the trade show, she and I connected.” It was the first of several business relationships that helped bring quick and strategic growth to a company that today employs 55 people between its Saskatoon and Toronto offices.

And yet, all of that may have been less likely were it not for the pivotal TELUS deal, which required Regnier to build an enterprise- level solution early in Coconut’s evolution. That allowed the company to modify its platform to meet the specific needs of the lucrative financial services industry and leave competitors to focus on the small- and medium-sized business market. In addition to Jackson Hewitt and TELUS, Coconut counts among its clients Royal Bank, TCU Financial Group, and Connect First and Servus credit unions in Alberta.

As a mom who runs a fast-growing technology company, Regnier doesn’t believe it’s possible to strike a balance between work and home life. She prefers to talk in terms of boundaries. “I can say that I’m at home on weekends with my family and if something work related comes up, it would need to be urgent for me to change my plans. I made a promise to my family that I’ll be there.”

She acknowledges that her business career has benefited from a dollop of luck in addition to years of hard work and planning. However, she says there’s never been a better time for women to chase their dreams of becoming successful entrepreneurs. “There’s more resources than ever—there’s more funding—and the industry is really hungry to help lift up young women and help them evolve.”

As a board member of Co.Labs, Saskatchewan’s first technology incubator, Regnier is part of that effort. She urges all would-be entrepreneurs to reach out to Co.Labs. “It’s a great place for entrepreneurs to get off the ground.”