Despite Production Setbacks, Cigar Lake Mine on Track to Produce a Projected 18 Million Pounds of Uranium 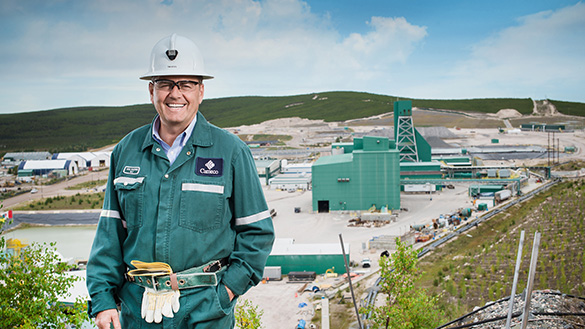 Saskatoon-based mining company Cameco Corporation, operator of the Cigar Lake Mine, reports it is on track to reach its production goal of 18 million pounds of uranium at the mine by 2017 — less than 18 months after the mine’s official opening last fall.

One of the world’s richest uranium deposits, the ore body at Cigar Lake, some 700 kilometres north of Saskatoon, was discovered back in 1981. Since then companies, mainly Cameco, have spent more than three decades overcoming challenges and inventing new mining techniques to finally reach the production stage. But Cameco’s president and CEO, Tim Gitzel, is confident that his company has hit the jackpot in Saskatchewan’s ore-heavy landscape.

Indeed, the Cigar Lake mine is one of a long list of successful mining ventures in the Prairie province of Saskatchewan, where the industry accounts for 30,000 jobs and is showing significant signs of growth. In fact, the Canadian public-policy think tank Fraser Institute’s 2015 Survey of Mining Companies ranked Saskatchewan the second-best mining jurisdiction in the world and the first within Canada due to its competitive tax system and transparency over land claims, which makes it an attractive mining investment.

The Saskatchewan government continues to see the mining industry as a driver of economic growth and activity. The province saw an estimated $238-million spent on mineral exploration last year, the bulk going to uranium. Based on 2015 preliminary numbers, the total value of Saskatchewan’s mineral sales for 2015 is approximately $8.2-billion and the province accounts for approximately 22 per cent of the world’s primary uranium production.

For Cameco, it’s been a long journey getting into production, with the most challenging hurdles generated by two floods in 2006 and 2008, which filled the mines with water and hindered the mining company’s progress towards production. But the high-grade uranium was too good to pass up. “There was no other choice. We had to pump out the water and start over again,” recalls Mr. Gitzel. “It looked pretty grim and there were many that said we’d never get it right.”

However, within the decade, he was able to prove their critics wrong, giving credit to the ingenuity and perseverance of his team that developed a unique mining method to get at the ore body, which was locked within a water-saturated sandstone. Extraction required freezing the ore body by way of a series of underground pipes and a -30 C brine solution, then employing a drilling method called jet boring, which cuts through the frozen rock with a high-powered jet of water. The resulting slurry is then pumped to the surface.

“Whenever I see the drilling, I marvel at the high-tech robotics and think about how long it took us to get here,” says Mr. Gitzel, “but also how it’s all been worth it.”

Cigar Lake is just the beginning, according to Mr. Gitzel, who explains there are already junior miners in the area exploring for more potential uranium deposits. And the demand is there with customers from all over the world looking for uranium to fuel nuclear power plants in the U.S., China, India and France.

“Saskatchewan is a very attractive province for mining—lots of potential,” agrees Vincent Martin, president and CEO of Saskatoon-headquartered AREVA Resources Canada, whose geologists discovered the Cigar Lake deposit. AREVA owns 37 per cent of the Cigar Lake project, and now processes the mined uranium at its McClean Lake facility, which is 80 kilometres away from the mine. “We have been active in the area since 1980 and see this as an investment,” he adds, “not only in the industry but also in the communities that surround the mine.”

Both the mine at Cigar Lake and the McClean Lake mill employ more than 800 full-time workers and hundreds of contractors, with more than half of those employees coming from indigenous communities in the area.

“We’re striving to increase this number,” says Mr. Martin, referring to AREVA’s training programs and scholarships. “They know the area and the land and we think that providing employment opportunities to these communities is beneficial to us and to them.”