HUGR - An App for Your Own Personal Support Group 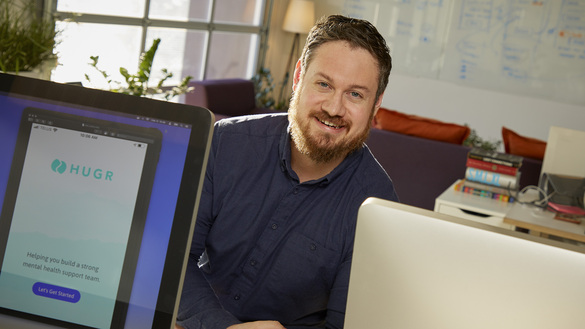 In addition to its other unfavourable aspects, depression can be tough on relationships. Some friends and family members want to help but don’t know how, while others say they’ll help but won’t or can’t. There’s also the insidious self-imposed isolation that often accompanies the disorder.

“Relationships are a two-way street,” says Scott Borys, who used his own experience with depression to help develop a mental health app called Hugr. “When you begin disappearing from someone’s relationship, they might stop reaching out to you.” Borys, a partner at Saskatoon’s Territorial Creative Inc., says a major feature of Hugr is that it can help people who suffer from depression establish and educate a personal support group that can be in place during a depressive episode or help prevent an episode from occurring. Borys knows of no other mental health app that takes this approach. “Some apps out there connect to an anonymous support community. What we want to do is help you turn the important people in your life into your support group.”

Territorial, which debuted Hugr as a web app, responded to user feedback by developing a mobile version of the app that’s set for a closed beta release in early 2020. Hugr leans heavily on Borys’ experience with a particularly deep, months-long depressive episode he endured in 2015-17 (he has since learned his depression is part of a bipolar disorder). A University of Saskatchewan graduate with degrees in computer science and civil engineering, Borys employed a scientific approach in trying to help himself better understand and overcome his debilitating malady.

“Being the engineer that I am, I created a big spreadsheet in Excel and started tracking all the different qualities that were affecting me,” he says, adding these included mood, food, sleep, meditation, medication use, and weight gain. “When I returned to work, I and my business partner, Daren McLean, decided we would build a tool to help me get through this lived experience.”

That tool evolved into Hugr, the personal app, and more recently into an enterprise version of Hugr that’s designed for use in the workplace. Territorial has partnered with nationally recognized workplace psychologist Dr. Bill Howatt as well as HeadsUpGuys, a British Columbia based organization that focuses on managing and preventing depression in men, to assist with the education and training aspects of the app.

Hugr’s unique support-group approach requires commitment  from group members and an understanding that each brings something different to their relationship with the vulnerable individual. During his protracted illness, Borys’ tracking efforts revealed many correlations between qualities and behaviours, and outcomes. Hugr support group members agree to receive and act on member-specific notifications triggered by data patterns indicating depression is returning or worsening. “The app uses pretty granular permissions,” Borys says. “So you can say, ‘hey, with this person I want to share these things, but with my psychologist I want to share all these things.’ If I’m really depressed on a certain day, for example, then I want my sister to text me.”

These pre-determined communication agreements reduce or eliminate the need for the primary user to reach out for support at a time when it can be difficult to do so.

Borys says Hugr’s enterprise version is intended for use by co-workers at organizations interested in creating psychologically healthy workplaces by adopting standards advanced by the Mental Health Commission of Canada. One of the features of the workplace Hugr is that the tracked data would be available to a human resources representative in the anonymous aggregate. “This would allow HR to track how employees feel when they go to a particular meeting or work on a specific project. It could offer a better understanding of how different factors affect mental health in the workplace.” Borys says the enterprise program would operate as an opt-in segment of a benefits package and all accumulated anonymous data would reside on safe servers within Canada.

Hugr grew out of the new and more open approach to mental health in Canada. But in spite of efforts to remove the stigma associated with mental illness, Borys believes we still have a long way to go before mental and emotional issues are treated the same way as physical maladies.

“I’m seeing movement and, I assume, it’s better than it was 10 years ago,” says Borys. “But I think that if somebody has a heart attack or cancer, people are willing to accept that and provide support. Depression or bipolar or anxiety just don’t have the same recognition. Not yet, anyway.”