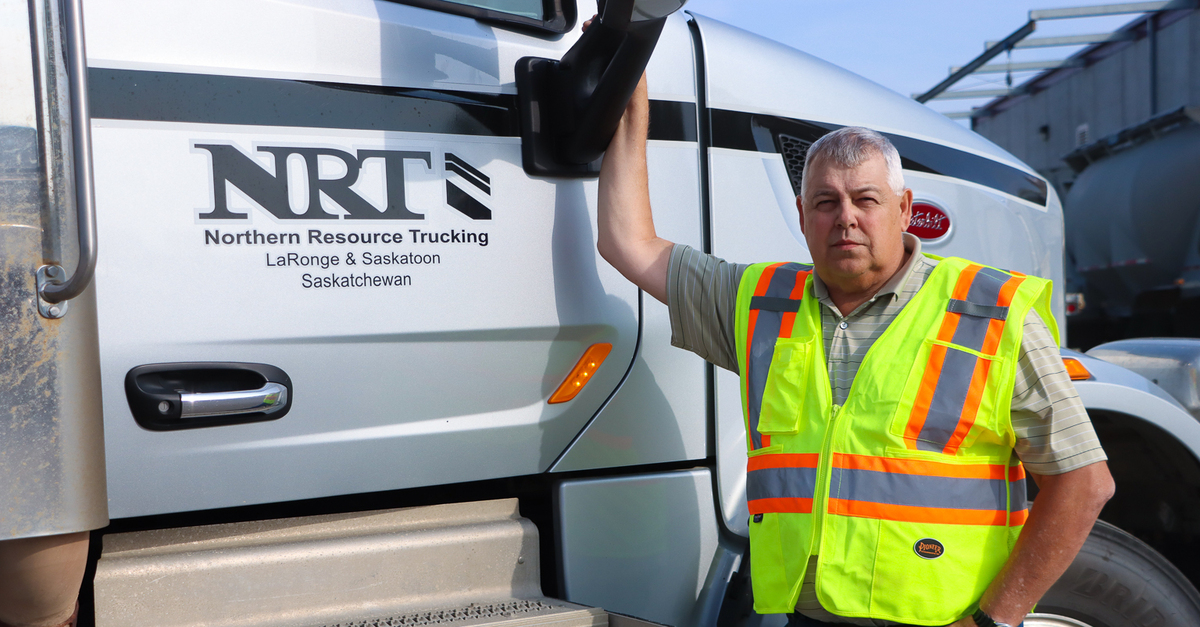 “It’s all about merit,’’ explains McIlmoyl. “When we bid on business, we don’t tell people that we’re Indigenous owned. We tell them we’re a safe trucking company. In the world of dangerous goods hauling, unless you’re very safe, you’re just not allowed to work. We’ll tell them our rates and then say ‘oh, by the way, we just happen to be Indigenous.’’’

NRT, one of the oldest Indigenous-owned firms in Saskatchewan, is also one of the safest trucking companies in North America. NRT measures safety by the industry standards of accidents and lost-time injuries per million miles. “We rate among the best in North America in dangerous goods hauling,’’ says McIlmoyl.

NRT launched in May 1986 as an outgrowth of the Key Lake Board of Inquiry into the environmental and socio-economic impacts of uranium mining in the Key Lake region of northern Saskatchewan. McIlmoyl says the board canvassed northern communities in the area and found Northerners approved of uranium development but wanted to participate in the benefits. A bidding preference for northern businesses was one of the conditions of the Government of Saskatchewan’s project approval process.

At the time, McIlmoyl was the executive director of the Lac La Ronge Indian Band (LLRIB), the largest band in the province with about 11,000 members. He had been tasked with finding economic development opportunities for the band when approval for the Key Lake uranium project came down. He remembers the flood of inquiries that followed the government’s decision.

“We were immediately inundated with companies who wanted to partner with us,’’ he recalls. “And a lot of them wanted a partnership of convenience, where they would do everything and just have us sign on with them. But we weren’t looking for that.’’

Brodsky Construction of Saskatoon approached the band with a proposal to participate in a contract to haul crushed aggregate for the Key Lake mine. Brodsky and LLRIB won the contract, the band purchased six gravel trucks and Brodsky supplied the additional equipment, operations staff and expertise. It marked the beginning of NRT and a long sequence of events that now finds the company growing and expanding into other provinces.

NRT employs about 120 people including office staff, company drivers, and independent contractors and their drivers. McIlmoyl says the firm has about $7 million invested in equipment that includes about 100 trucks and 235 trailers. Its major clients are Cameco, Orano, SSR Mining and Federated Co-operatives Ltd.

Most of the company’s work involves hauling commodities and material into mines and other facilities in northern Saskatchewan. Each year NRT hauls out a small amount of equipment and about 200 loads of yellowcake, a powder obtained during the processing of uranium ore. But NRT hauls well beyond Saskatchewan’s boundaries. “We now operate from Thunder Bay to the Pacific coast, and from time to time we haul yellowcake into the Port of Montreal and pick up drilling rods in New Brunswick.’’

McIlmoyl credits the provincial government for bringing much needed economic development to northern Saskatchewan by moving ahead with uranium mining. Many Indigenous businesses in the North “cut their teeth’’ working in the uranium industry and used their experience as a springboard to expand into other commodities and businesses, he says. He believes other jurisdictions in Canada can learn from Indigenous economic development in Saskatchewan.

Increasing Indigenous participation in the economy is a key priority for the Saskatchewan government. The province recently launched the Saskatchewan Indigenous Investment Finance Corporation which provides loan guarantees to support Indigenous-equity ownership of major projects in mining, energy, oil and gas, forestry and value-added agriculture. During the 2021-22 fiscal year, the province committed $28.1 million for skills training and employment initiatives specifically targeting Indigenous individuals.

Providing training opportunities is also important to NRT, which must employ top drivers able to haul dangerous goods and overweight loads on northern roads. To be eligible to work at NRT, drivers must have 150,000 kilometres of semi-trailer experience and driving records with very few blemishes. NRT started an SGI-endorsed truck driver training school to help bolster the supply of high-quality drivers and potentially generate additional revenues. McIlmoyl says the company will also hire new graduates as junior drivers, who then gain required experience by driving beside seasoned professionals.