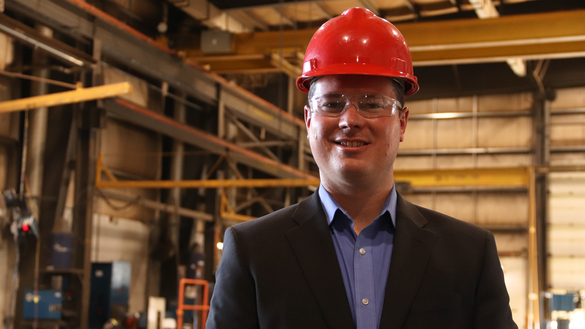 When the pandemic hit North America, jurisdictions were concerned about the need for emergency beds to meet the expected increase in demand for hospital care. Saskatchewan-based Saskarc Inc. (Saskarc) quickly mobilized a response to this need and retooled its facilities to accommodate hospital bed production.

In order to ramp up production and distribution quickly, Saskarc partnered with two large American manufacturers and a global health and commercial business to form a joint venture called Fastbeds. The new partnership scaled up production almost overnight.

During April, Saskarc produced and distributed more than 10,000 beds from its own shops and shipped 30,000 beds in partnership with local Western Canadian subcontractors and U.S. partners  to locations across Canada, the U.S. and internationally.

“There wasn’t a lot of time so we just did it, hence the name Fastbeds,” laughs Roy Drever, General Manager of Saskarc. “We had a discussion between the three different companies on a Wednesday evening and the following Monday we were producing beds. So, between Wednesday night and Monday morning, we had developed a joint venture, set up a team, created a website, developed a design and prototype and tested it, and moved it into production. Basically, one week after conception, we were shipping our first orders of beds.”

It’s that type of innovative thinking that has enabled Saskarc to grow from a garden shed with two employees in 1991 to a company that now includes two modern fabrication plants spread out over 14 acres employing around 100 staff.  It provides large-scale metal fabrication of structural steel across Western Canada and most of the continental U.S.

Once demand for the hospital beds began to wane, Saskarc quickly pivoted again – this time to fill a gap for hand sanitation stations as health precautions and safety measures were enforced nationwide in an effort to stop the spread of the virus and prevent a second wave. The company’s forward-thinking mentality propelled them to develop and manufacture a range of hand sanitizer stations for low, medium and high traffic areas, which they are currently producing by the thousands.

Although the market for emergency beds was fairly straightforward, sanitizer stations are more complicated. “People are reaching out because they aren’t sure what their requirements are,” explained Drever. “They’re trying to understand things such as how many people will use these, how much sanitizer will they need, what size station will I need, how often will I fill them, do I fill them with gel or liquid, and so on.”

No one can predict the future, but the company expects that large retailers, shopping malls, arenas, restaurant and food chains, schools and health authorities will continue to be potential markets.

Reconfiguring their operations to produce emergency beds and hand sanitizer stations was no easy task. Drever said the company is primarily a large-scale structural and platework metal fabricator, and the facility is configured to fabricate products that meet the unique requirements of its customers.

Creating dedicated product lines meant that everything had to be changed to meet an assembly-style format. At the same time, the company had to continue servicing its regular clientele and projects.

“We essentially cleared out one of our shops, washed it down and then reset it up with four full assembly lines. Although this was a lot of work, it is something that the entire team really got behind because it was supporting such an important cause as combatting COVID-19,” said Drever.

Through the midst of that transition, the company also had to contend with its own COVID-19 restrictions. Saskarc instituted new physical distancing rules; employees had new start and stop times; lunch and coffee breaks were staggered; and at the same time they had to maintain the limit of 10 people per room threshold.

Key personnel still worked on-site, but most meetings had to take place virtually. The plants had to be sanitized on a regular basis; hand sanitizer stations were installed; since travel was restricted, sales calls took place over the phone or through virtual meetings; and the facility was closed to visiting vendors.

Drever said that the team has pulled together through this challenging time, which has made them closer than ever. During a period of time that generated a lot of uncertainty around the globe, the company tried to provide an area of stability so there would not be much disruption to employees’ personal lives.

“We have a very diverse team with staff coming from about 18 different countries,” he said. “With everyone experiencing this global pandemic differently, we tried to be that rock where people could go to work and know there was a good plan in place.”

Not only did Saskarc maintain jobs within their own organization, but they provided work for other subcontractors who had initially laid off workers and then were able to bring them back.

Developing and implementing a good plan seems like second nature for the company. Drever recalled several projects that highlighted the company’s ability to meet new challenges. For example, a few years ago, the company was awarded a contract to supply large modules for use at the SaskPower Chinook Natural Gas Power Station in Swift Current. It involved modularization, assembly and transportation of some of the largest pipe modules ever modularized in Western Canada.

During the last 24 months, Drever said the company has begun investing in automation and technology to increase efficiency and production. The end result is to offer customers the same high-quality work that they’ve been accustomed to, at a more competitive price, to a wider customer base. This also coincides with the company’s strategic direction to become more engaged with the structural market, which would lead to more fabrication work for high rises, buildings, hospitals and stadiums.

“Depending on the client and the project, in many cases we’ll be given rough design questions and then we’ll perform the detailing and build to their design drawings,” said Drever. “In other cases, we’ll be contracted to do a design build and then engage our engineers and they’ll build the design based on a set criteria.” Each project has its own set of deliverables and timeline, and Saskarc’s ability to “bridge the gap” from concept to reality is what makes it an industry-leading fabricator.

Drever added that Saskatchewan is a great place to do business because so many of the larger corporations recognize the expertise of local businesses and rely on them to meet their needs. “One of the regular things I hear about the business community is that Saskatchewan is a pretty close-knit province. We all support one another and we keep working together.”