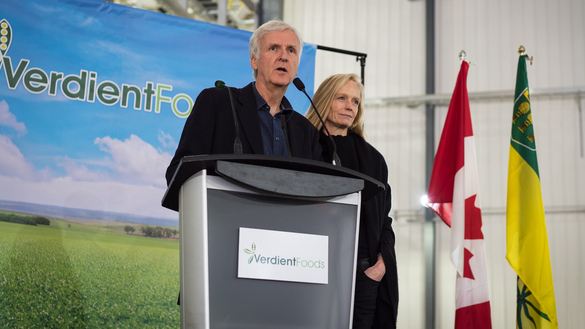 In the past two decades, the province of Saskatchewan has built its pulse sector into the biggest in the world. It is the largest exporter of lentils and dried peas and a significant producer of chick peas. Saskatchewan is recognized worldwide for the quality of its crops. In recent years agri-value companies have stepped in to make significant investments into further processing these crops.

AGT Food and Ingredients has been there from the beginning, working with producers and crop development scientists to perfect the types of pulses best suited for processing and exporting. Growing with the province’s pulse sector since it started in 2003, the Regina-based company now has 20 of its international network of 48 manufacturing facilities located in Saskatchewan.

In 2013, Agrocorp Processing Ltd. opened what is now a $20 million high-throughput pulse, grain and oilseed facility centre in Moose Jaw, Saskatchewan. The company is the wholly-owned Canadian subsidiary of Agrocorp International, based in Singapore, which is one of the world’s largest pulse traders. In 2016, it moved its Canadian headquarters from Vancouver to Moose Jaw to demonstrate its commitment to its business here and to be closer to production. Its Saskatchewan operations in Moose Jaw and Cut Knife process and ship lentils, peas, flax, canola and durum wheat. The company plans for $20 million in expansions to its Saskatchewan facilities in the next few years.

The newest player to Saskatchewan’s value-added pulse scene is a company founded by expatriate Canadian and Hollywood movie director James Cameron and his wife Susie Amis Cameron. In September, their company Verdient Foods Inc. opened a multimillion dollar pea processing plant in the town of Vanscoy, Saskatchewan, which they expect to become the largest organic pea protein plant in North America.

With the world’s population forecast to grow to 9.2 billion by 2050, the demand for plant protein is increasing exponentially.  These companies have realized that Saskatchewan offers the best value proposition for those wanting to be part of that growth.

“Saskatchewan has the competitive cost environment, stable regulatory regime, accessible government, great workers and work ethic, and an overall culture of innovation. All of these things led us to establish our head office here and 20 manufacturing facilities,” says AGT President and Chief Executive Officer Murad Al-Katib.

A key competitive advantage for the province is the strong partnerships between researchers, industry, producers and government to add value to crops produced here.

These three companies also found the government to be a strong ally in turning a potential investment into bricks-and-mortar reality. Cameron and his partners decided to pursue their pea processing venture in Saskatchewan because of its “business-forward mentality,” he told the audience attending his plant’s grand opening in September. “It’s very business friendly to bring capital into here and have it matched and to grow a business very quickly. This place has come together with really lightning speed compared to if one had tried to do a similar enterprise in, let’s say, California,” he said.

Saskatchewan has also invested heavily in building the infrastructure to support the growth of a world-leading agri-value industry.  It has invested in roads, connectivity to rail and intermodal container access to allow processors to get their product to market in a timely fashion. AGT ships its products from Saskatchewan to 120 countries around the world.

The province offers one of Canada’s lowest corporate income tax (CIT) rate for manufacturing and processing operations – at 10 per cent.  It has introduced the Saskatchewan Commercial Innovation Incentive in 2017, which can lower the CIT rate to six per cent for corporations that commercialize their qualifying intellectual property in Saskatchewan.

These three companies have seen the opportunity to be part of Saskatchewan’s protein highway. Al-Katib sums up the value proposition: “If you want to be international and a leader in value-added agriculture, Saskatchewan is the place to be.”