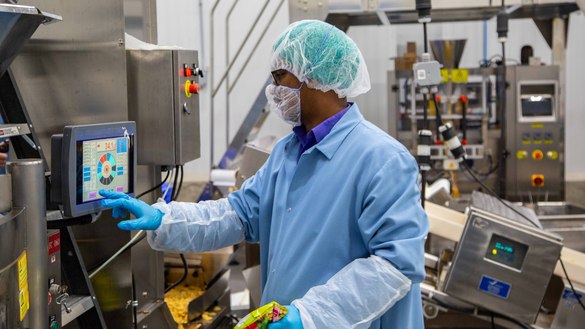 Plant-based proteins are a hot topic these days, especially following the much-publicized rise of companies that have seen their meat-free products sought out by consumers in the past few years.

Saskatchewan has played a key role in developing this fast-growing market segment.

In fact, the province is a true trailblazer when it comes to value-added agricultural products and agri-business development.

“When I was a kid growing up on a farm in the middle of Saskatchewan, we were considered the breadbasket of the world, but I don’t think that provides a true snapshot of the province’s industry today,” says Shannon Hood-Niefer, vice-president of innovation and technology at the Saskatchewan Food Industry Development Centre (Food Centre) in Saskatoon. “We’re more like the alternative ingredient food basket of the world.”

The province is a global pioneer in this respect, developing new uses for pea protein and creating innovative products for the plant-based food sector.

At the heart of this technical innovation is the Food Centre. Over its 20-plus-year history, the not-for-profit organization has worked with more than 350 food companies and producers.

“Our services are broad and deep,” Hood-Niefer says.

The centre is both an incubator of new ideas and manufacturer for small companies looking to bring their new products to market. As well, it offers research and food safety services.

“It’s a one-stop shop for the province’s agri-value industry,” she adds.

Verdient Foods Inc. — led by Oscar-winning Canadian film director James Cameron and his wife Suzi Amis Cameron — opened a pulse processing facility in 2017 at Vanscoy, southwest of Saskatoon. It has had a long and productive relationship with the centre.

“They’ve been an incredible partner,” says Laurie Dmytryshyn with PIC Investment Group, a minority partner in Verdient Foods. “The other thing that’s been so helpful is their amazing new facility and the product development work that they’ve done with our products, our pea protein, our pea starch — they’ve made some amazing value-added food products that we’re very excited about … we want to value-add those ingredients and we want to do it here in Vanscoy.”

When it comes to agri-value, Saskatchewan is uniquely positioned to lead the world in the development of new foods for consumers. Saskatchewan is the world’s leading exporter of lentils and dried peas. Its pulse crop sector is a billion-dollar export industry and adding more value to that with processing to ingredients like pea protein is occurring already.

Besides its natural competitive advantage in terms of raw ingredients, the province offers competitive operating costs and a suite of incentives to help agri-value businesses grow. These include the Saskatchewan Value-Added Agriculture Incentive, a 15 per cent tax credit on capital investments in the province, and Product 2 Market, a program that supports the development and marketing of agri-business value-added products.

Equally important, however, is the fact that Saskatchewan has the people, infrastructure and know-how to move the agri-value industry into new frontiers.

“There is a cluster of expertise here,” Hood-Niefer says.

Complementing the work done at the Food Centre is the University of Saskatchewan’s highly respected Department of Food and Bioproduct Sciences at its College of Agriculture and Bioresources, which produces a new crop of highly skilled graduates every year.

“We also have Agriculture and Agri-Food Canada, Saskatchewan site, that has a great program for breeding and doing work on the structure of proteins to better understand what will make them work in new food products.”

Even the Canadian Light Source synchrotron plays a big role in agri-value food development. “They can image the micro-nutrients in a seed with unparalleled precision,” Hood-Niefer says of the synchrotron, located at the University of Saskatchewan in Saskatoon.

By providing a unique understanding of the structure of plant and animal proteins, “we can better understand how these might work in a variety of commercial applications.” Achieving the right functionality of plant proteins to match the food application, whether beverage, nutrition bar or meat analog is important.

The Food Centre plays an integral role in this product development infrastructure.

Whether it’s assisting a startup to develop an egg-protein-based puff snack, or processing a ton of bacon a week for a local producer at its Pilot Plant, the centre wears a variety of hats.

Its role includes brainstorming new ideas for companies large and small and helping develop these new ideas into marketable products for sale across Canada and around the world.

A fast-expanding part of centre’s work is moving the needle forward with regard to plant protein commercialization, she says, adding pea protein is one of the most exciting and rapidly growing parts of the industry.

“Some of the world’s largest companies are coming to us because we have built up expertise in this specific area.”

Hood-Niefer is quick to add that the centre, and the province in general, is a development hotbed for any agri-value business, whether that involves plant- or animal-based products.

“We are proud that we’ve had a hand in moving the alternative meat and dairy industry forward, just like we’re proud that we have helped dairy and meat companies develop and export products to grow market share in Canada, and beyond.”