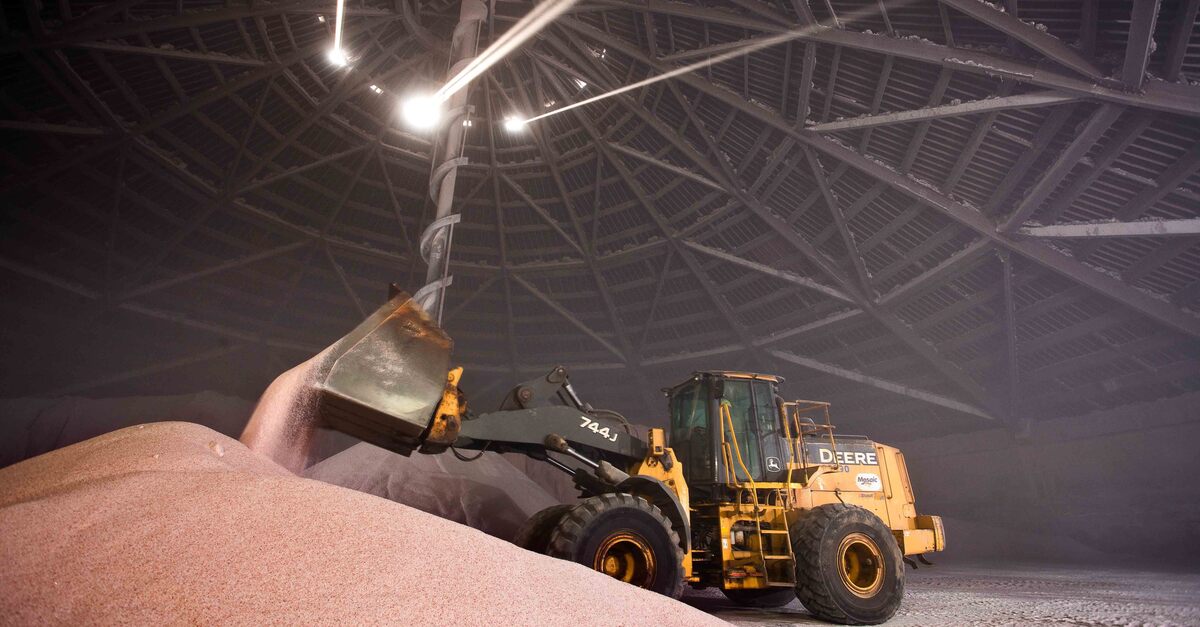 Saskatchewan's potash producers are responding to surging global demand by increasing production capacity, a move that is generating investment, creating jobs and powering economic growth.
Saskatchewan is a potash powerhouse, typically accounting for around 30 per cent of the annual global production. Potash is a key ingredient in the fertilizers needed to grow crops throughout the world. Traditionally, Russia and Belarus have also been major potash producers but with the ongoing sanctions, more countries are now turning to Saskatchewan for this important commodity.
“The world is looking to Saskatchewan as a reliable and ethical supplier of the most sustainable potash in the world,” Trade and Export Development Minister Jeremy Harrison said. "We are becoming an increasingly integral part of a safe, dependable supply chain for the food, fuel and fertilizer the world needs."
In 2021, Saskatchewan's potash sector recorded all-time high production and sales of $7.6 billion. Increasing demand and rising prices are expected to generate record sales in 2022, well above the $9 billion objective initially earmarked for 2030 in the province's 2020-2030 Growth Plan.
These market factors are augmenting Saskatchewan's already favourable investment climate. Over the last 15 years, Saskatchewan producers have committed $30 billion towards new potash mines and expansions. The current geopolitical situation is disrupting potash supply from Russia and Belarus, which in turn is adding to the concerns about global food security and making Saskatchewan's investment regime even more attractive.
"Saskatchewan's potash royalty and tax system offers significant incentives to invest in new mines and mine expansions," Harrison said. "We continue to work with potash producers to ensure Saskatchewan remains the most stable and competitive jurisdiction for potash investment in the world."
Nutrien, which has six potash mines in the province, is ramping up its production capability to 18 million tonnes by 2025, a 40 per cent increase over 2020. This is expected to create about 350 new jobs. The company is also evaluating possible mine expansions to increase production to as high as 23 million tonnes in the future.
K+S Potash Canada has announced plans to expand production to four million tonnes over the next few decades at its Bethune mine, a move that has the company hiring 70 new positions. Meanwhile, Mosaic is boosting operating capability by 1.5 million tonnes at its new Esterhazy K3 facility and Colonsay mine by the second half of 2023. Mosaic has added 150 on-site jobs since resuming production at Colonsay in 2021. New potash mine projects by several other companies are also in various stages of development in the province.
BHP is working to accelerate first production of its $12 billion Jansen potash mine by a year to 2026. The company is also evaluating Stage 2 of the project, which would double expected production. The Jansen project will create an estimated 3,500 jobs during peak construction and more than 600 jobs when the first stage of the mine is operating. BHP estimates Jansen's total production capacity could reach 17 million tonnes per year once all four possible stages of the mine are complete.
Saskatchewan producers are continuing to evaluate future investment opportunities in light of projections that demand for potash will continue to grow over the next decade. The province's substantial potash reserves and favourable investment climate put it in a strong position to play an increasingly important role in global food security and the economy of Saskatchewan.
The 2021 Fraser Institute Annual Survey of Mining Companies ranks Saskatchewan as the best jurisdiction in Canada for mining investment attractiveness and the second most attractive jurisdiction for mining investment in the world. The survey looks at factors such as competitive tax regimes, jurisdictional stability, regulations, infrastructure, and geological attractiveness.
"We take pride in the fact Saskatchewan has retained its position as the best place in Canada and moved up to second-best jurisdiction globally for mining investment attractiveness," said Harrison.
Saskatchewan's potash sector directly employs about 6,000 people in the province and contributes to the livelihood of thousands more. Saskatchewan is the only province in Canada that produces potash, and it is home to the largest potash resources in the world, enough to supply global demand for several centuries.