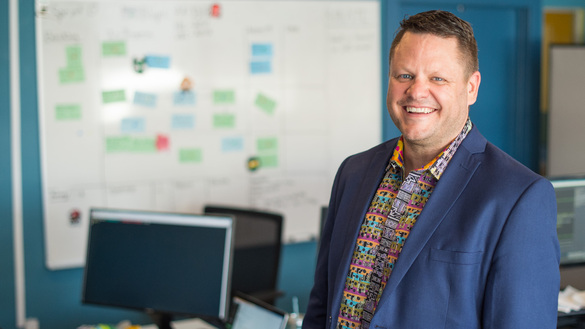 Move over Silicon Valley — there’s another hotspot for tech innovation.

Saskatchewan may not be the first place that comes to mind when you think of technological breakthroughs, but a number of up-and-coming firms are breaking the stereotype that the province is solely a resource-driven economy.

Among these tech upstarts are Vendasta and FrontRunner Technologies. Both are changing the way businesses market products and services to customers.

“We strive to be the No. 1 platform for delivering digital solutions to local businesses,” says Jacqueline Cook, vice-president of growth at Vendasta, a Saskatoon-based firm.

That’s a tall order given digital marketing is a crowded marketplace. But Vendasta’s game-changing advantage is that it provides app-based solutions for businesses to better serve their local customers. The company, which has been around for about a decade, offers a full suite of online tools that allow businesses to manage social media, search engine optimization and other web-based needs. In the past few years, that business has taken off, with an expanding client-base in Canada and the United States.

And now the firm is moving into markets in Australia, New Zealand and the United Kingdom.

Regina-based FrontRunner Technologies has been in business for just over a year, but its story also demonstrates the province’s prowess for technological innovation.

“What FrontRunner does is transform windows — most often empty office and retail space — into dynamic content using projection mapping. We see ourselves as public space pioneers,” says founder Nathan Elliott.

In essence, the company uses its app-based WindowFront platform and digital technology to project video, images, animation and interactive content onto the windows of buildings and otherwise empty space in an urban landscape using rear-projection for a clearer image.

“It fills up empty window space and creates collaborative revenue opportunities for content creators and real estate groups by ushering in a new transformative model for displaying dynamic narratives,” he adds.

All said it’s just another day in the Silicon Valley of the Prairies, where opportunity is as big as the sky itself.

“We truly are the Silicon Prairie,” Cook says. “And it’s not just Vendasta — we’re really fortunate to have a lot of tech companies here.”

Growth of the industry has been largely people powered.

Elliott says Saskatchewan has no shortage of ambitious, highly skilled graduates from technical schools and universities. Some have gone on to create startups that have grown into more established businesses, including iQmetrix, the province’s largest tech firm.

Then there’s the Canadian Light Source, the only centre for synchrotron-based research in Canada, providing a state-of-the-art testing facility to study everything from the nature of the universe to cancer to nanotechnology.

It also helps that the government has stepped in to help grow the industry.

Besides investment in the Saskatchewan Research Council, which generates about $60 million in revenues annually along with employing more than 350 people, the province recently unveiled what it calls the “patent box” which will be open to applications later this year.

Officially called the Saskatchewan Commercial Innovation Incentive (SCII), it reduces the provincial corporate income tax rate for eligible corporations to six per cent for 10–15 years on income earned from commercialization of qualifying intellectual property in Saskatchewan, including patents, trade secrets, plant breeders’ rights, and copyrights (computer programs and algorithms).  The SCII program is open to any firm operating in any sector regardless of whether they own or license the qualifying intellectual property.  More program details are available here.

The program is music to the ears of tech firms such as FrontRunner.

“Intellectual property is very important to our model so we’ll be making use of that program in a big way,” Elliott says.

FrontRunner is just getting started so it has yet to generate much in terms of income, but it’s already making waves outside the province. In April, the company had its official launch in Toronto with an event that featured the projection of photos and video on the outside and inside of a hallmark building on Yonge Street in the busy metropolis.

Among the content displayed was an art installation of photographs of Syrian refugees who arrived in Saskatchewan in the past year.

Both Vendasta and FrontRunner are in hiring mode, adding highly skilled technical workers — the heart and soul of any 21st century economy.

While it can be a challenge to find talent, due to the province’s relatively small population, Elliott says the quality of homegrown applicants is impressive.

“We have great animators, app developers, designers and programmers that we’ve found all here in Regina,” he says.

Furthermore, the work ethic and ingenuity is second to none.

“Saskatchewan has always been a province of entrepreneurs that started with its First Nations and then its farmers and continues on into other sectors like tech today,” Elliott adds.

The Saskatchewan formula seems to be working.

“We work with some of the largest media companies in the world,” Cook says. “We sit at the same table with Disney, Netflix and a bunch of other multinational brands.”

This story was created by Content Works, Postmedia’s commercial content division, on behalf of Saskatchewan’s Ministry of the Economy